I had not eaten sago/tapioca since I was a child but a friendly recently made a batch and I found myself totally loving it!
I had a look online to see if there were any variations from the basic veganized version, and came across this one at:
http://www.dramaticpancake.com/2012/04/sandra-vegan-raspberry-tapioca-pudding/

We found all the ingredients in the supermarket.  I guess you can substitute with different berries if you like, but we found the raspberries to be delicious.

Method:
In a medium sized saucepan, place tapioca in a cup of the almond milk. Cover with a plate and soak overnight (or minimum of 4 hours) at room temperature.
Add second cup of almond milk and bring the mix to boil over medium heat. Add coconut milk and agave. Lower heat to medium-low and simmer, stirring slowly and continuously for 10 minutes.
Add raspberries and salt and cook for another 5 minutes. As raspberries soften, use a wooden spoon to crush them up a bit against the side of the pan.


Remove for heat. .Refrigerate for a few hours, and you will find yourself having a smooth, creamy cold dessert for summer.  I found that it tasted even better the next day. Or if it is winter, have it while it is still warm. 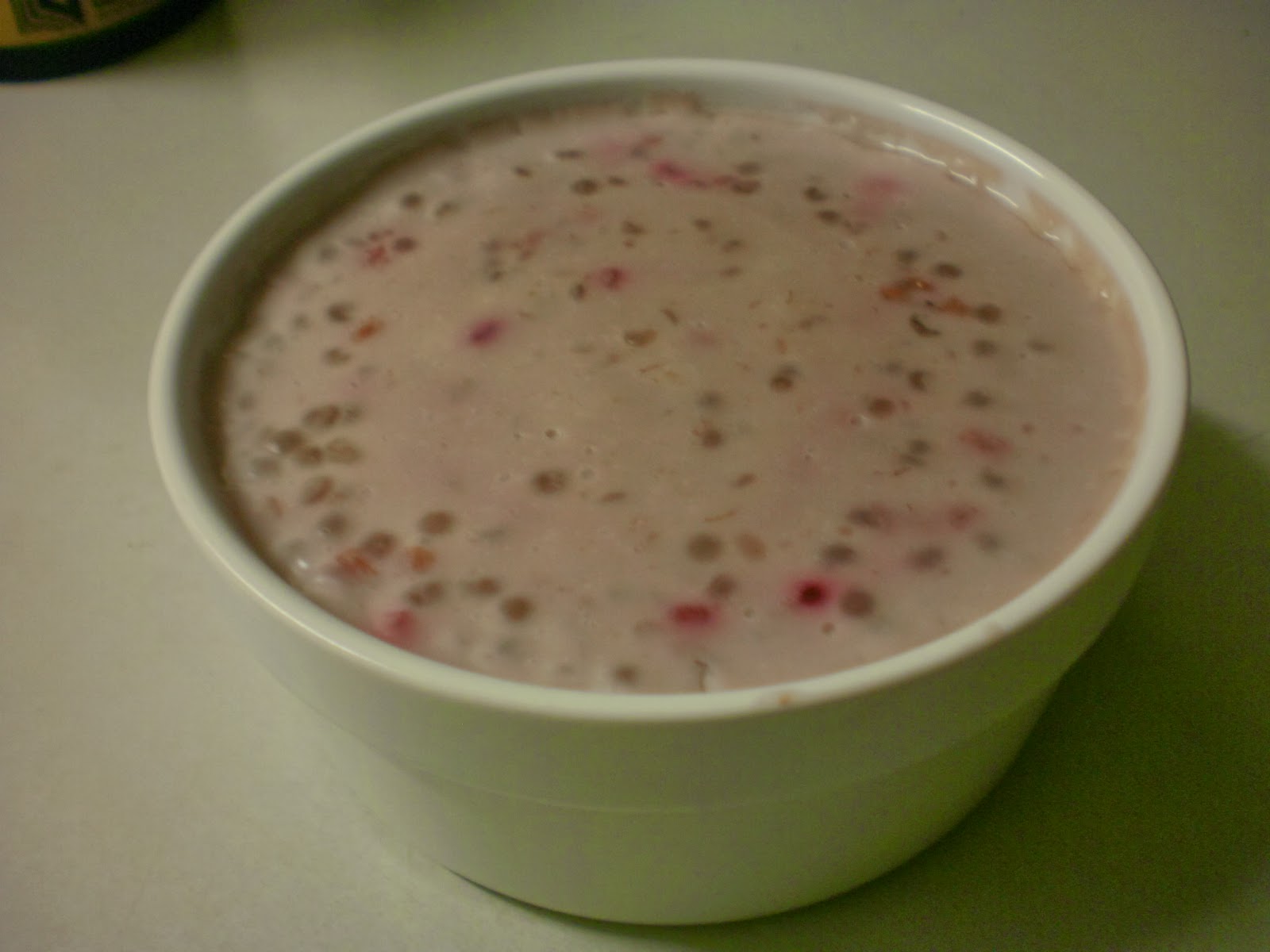 A super easy dish that you can serve with pita bread or vegetable tempura. The original recipe (which I found in the book “30 Minute Vegan” by Mark Reinfield and Jennifer Murray) calls for the use of onions but I have omitted them and the taste is still fine without them.

What you will need:
¼ cup sesame seeds (toasted or raw)
4 cups sliced cucumber (about 1 or 2 large cucumbers), peeled and cut about 2cms thick. You can seed if you want but I didn’t bother.
1 tbsp minced red onion (optional)
1 sheet nori, grated or cut finely (I used a pre-cut pack I found at the supermarket tin the Asian Foods section)
½ tsp sea salt
2 tbsp rice vinegar (found in the Asian Foods section of the supermarket)
Bag of salad greens

Method:
Combine all the ingredients and mix well. Serve in bowls lined with mixed salad greens. 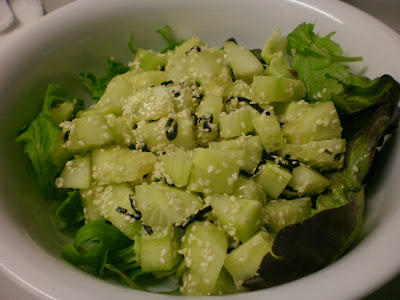 Another gluten free recipe I found in the book “Quinoa 365” by Patricia Green and Carolyn Hemming. This one is a mix of quinoa, black beans, corn and coriander. You can make it as hot (or not) as you like.

Method:
Bring the water and the quinoa to a boil in a medium saucepan. Cover and reduce to simmer and cook for 10-15 minutes. Turn off heat and leave covered to sit for 5 minutes. Fluff with fork and allow to cool.
Place quinoa in a large bowl.
Whisk oil, lime juice, apple cider vinegar, cumin and jalapeno (if using) in a small bowl. Stir dressing into quinoa.
Add capsicum, black beans, coriander and salt. Toss and serve.


Salad will keep for up to 3 days in a sealed container in the refrigerator. 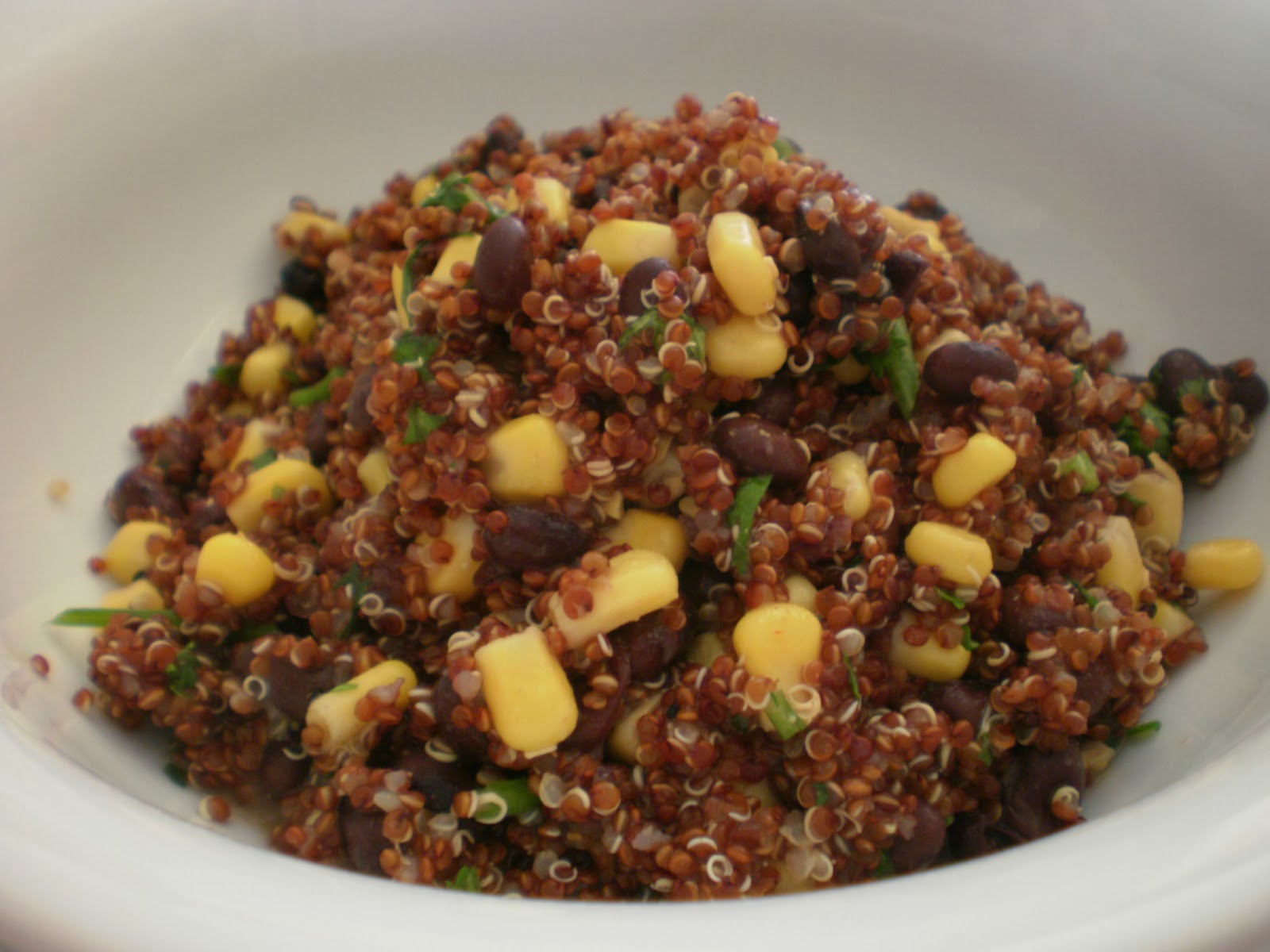 This recipe has been sitting in my ‘to try out’ folder for quite some time. I have no idea where I found it. My one regret is that it took me so long to give this one a go, as it is so yummy and pretty damn easy. A note about the red wine vinegar: make sure the brand you are using states that it is vegan, as not all are. (Animal products are sometimes used as filters.) I used Biona Red Wine Vinegar which I found at Alive Organics. 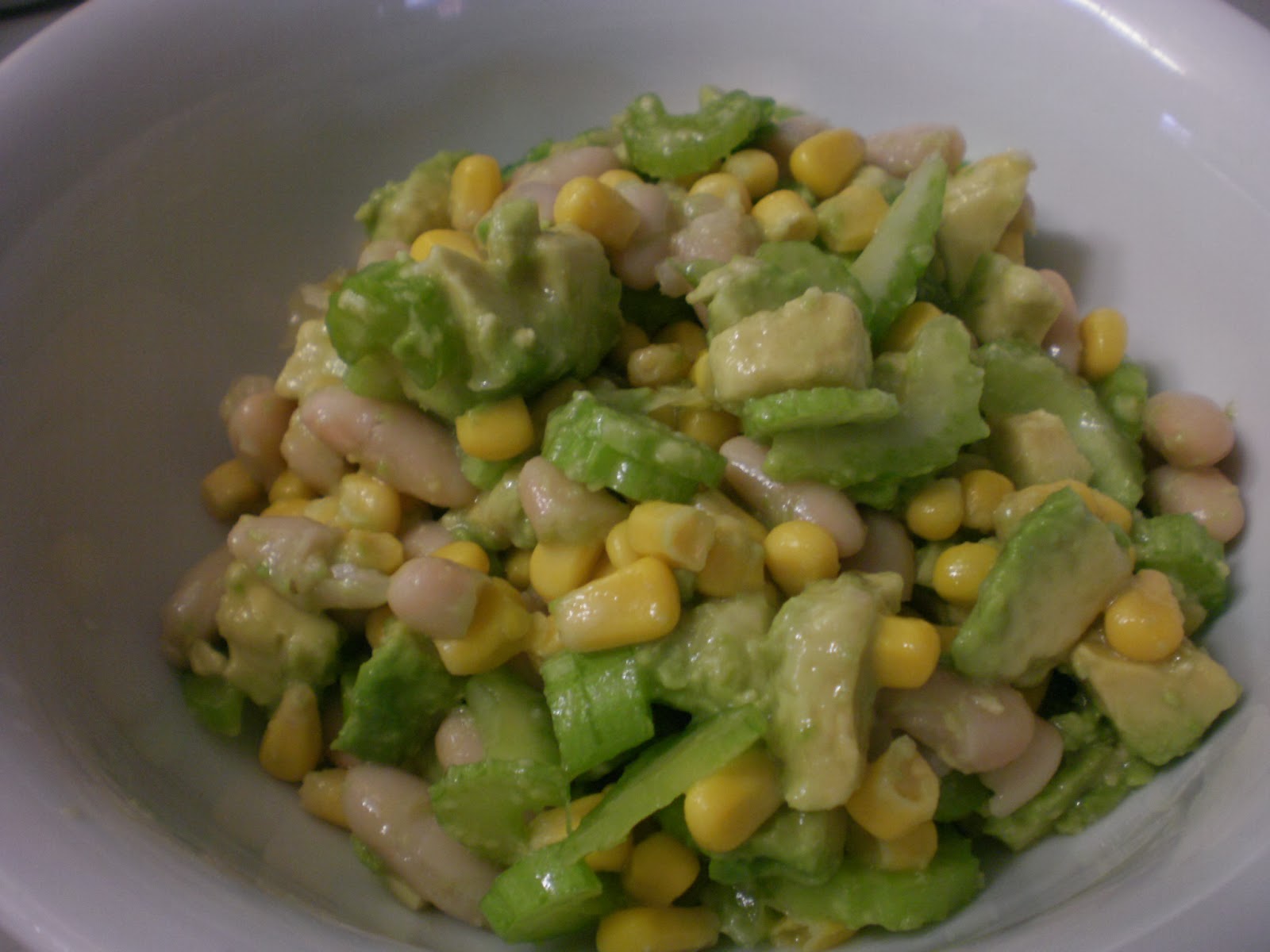 This is such a simple recipe and yet it taste so good! I found it in the book “Carb-Conscious Vegetarian” by Robin Robertson.The original recipe instructs to cover and refrigerate the quinoa mixture for 1 hour or more before serving but I just could not wait and ate it straight away. Still tasted great, but I imagine the refrigeration was for the flavours to develop further.

Method:
Bring the water to boil in a medium sized saucepan and add salt to taste. Stir in quinoa and reduce heat to low. Cover and simmer until water is absorbed – about 15 minutes. Fluff and let stand, lid covered.
In a large bowl, mix together the quinoa, cucumber, tomato, chickpeas and parsley. In a small bowl, combine the oil, lemon juice and salt to taste.  Pour dressing over quinoa mixture and mix gently.


Place salad greens in individual bowls and then spoon out quinoa mixture over the top. 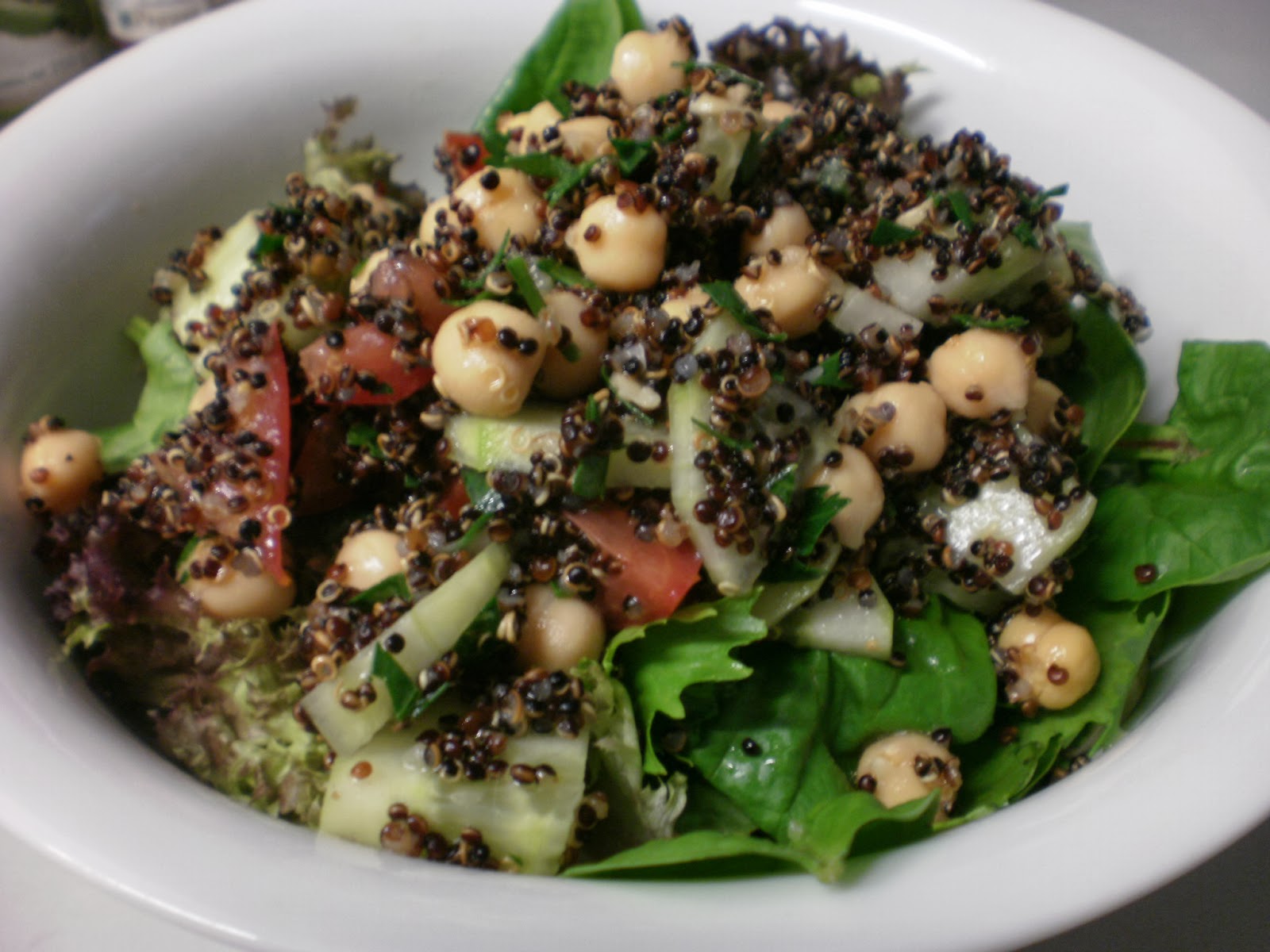 I blogged about the Raw Kitchen before but felt a new post needed to be made since their recent reinvention. Not only have they relocated, but they have also gotten bigger. 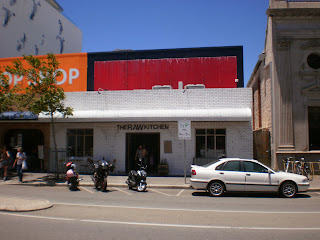 They are now situated at 181A High Street Fremantle, in what looks like a warehouse. The interior is all high ceiling, open faced brick walls, chain link fences and shipping containers. The tables range from long wooden ones, to booth styles, with seats that look like they have been ripped out of old buses. Sad to say that the other seating seems to range from small wooden chairs to metal ones. Common denominator - all pretty uncomfortable. I was really hoping that with the new venue, they would have ditched those chairs that were obviously built to hold primary school aged kids.
Your cutlery and water gets served to you in glass jars and brown bottles, and the food on small wooden boards and little enamel dishes. 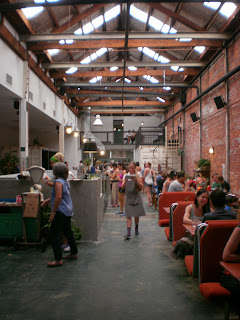 The whole look is a cross between rustic and recycled, which does not appeal to me at all. But then, that is just personal taste, I guess. Just so long everything looked and was clean, that's what matters the most to me - and this place certainly passed that requirement from what I noticed.

We were seated at one of the long wooden tables. Although this new location is much larger than their old one, the place was VERY busy and I understood that having such big communal tables saves on space. Having said that, I didn't really like sitting at a table, facing strangers while I ate. Oh well. 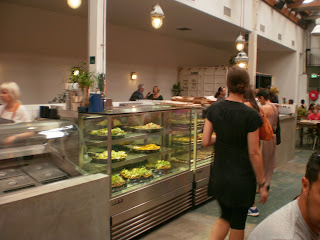 Apart from the food (which I will get to in a moment), the new Raw Kitchen also features the 'Sea Container Gallery' that displays pieces by local artists and craftsmen, which can be purchased.
Yoga and fitness classes, as well as raw food preparation classes are also on offer and I do believe there will be film nights planned.
The new venue also has a bigger shopping area where there are all sorts raw and non-raw  packaged food items - many of them vegan, plus books, gifts, toiletries, etc. 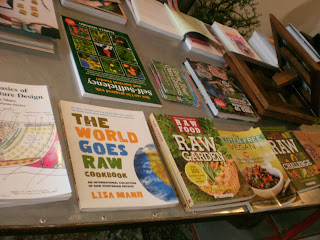 We found the service to be mostly good. Having only just reopened, a LOT of people are curious to see the new place, and so the place was already very busy when we arrived a little before noontime. Nevertheless, we were seated almost immediately and our orders were taken in a timely manner. The only gripe I have is that when ordering, we asked the server if there was any egg in the 'mayo' in two of the dishes we wanted. She kept saying 'There is no dairy' in any of our dishes. I had to point out to her that egg was not dairy, which gave her pause. To her credit, she did go and find out for us. The verdict - NO EGG is used in ANY of their dishes. This of course begs the question  - why do they not mark this on their menu? Their menu is marked as completely dairy free, and where honey is used, it is marked. Why not mark things as completely egg free or just use the 'vegan' tag, and be done with it? Surely, they realize that a big number of their clientele are vegans?

For our entree, we opted for the Aromatic fennel seed roasted chats with lemon juice. 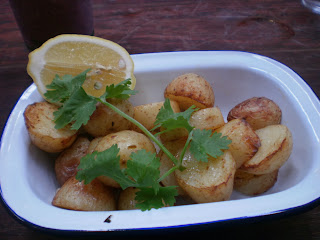 I'm a big fan of potatoes and these were lovely. Cooked just right. Obviously, this wasn't a raw entree. Infact, there were quite a few new items on the menu and quite a few were not raw. This may bother some raw food purists and it didn't bother me one bit.

The other entree we had was the Tempeh snaps. These were strips of cooked tempeh, made from lupin and not soy, sitting on top of cooked cauliflower. The dish came with a tasty garlic and caper aioli. I am not big on garlic but found their aioli to be mild on that front, so I enjoyed it very much. 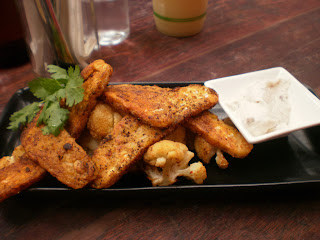 For drinks, I opted for the Blue Moon smoothie, which featured blueberries, banana, lavender, agave, and almond milk. It was delicious. You could certainly taste the lavender but it was not overwhelming.
My partner had the Dream Juice which was a mixture of pineapple, lime, young coconut and apple.

For the mains, we had a lot to choose from. I ordered the club sandwich. 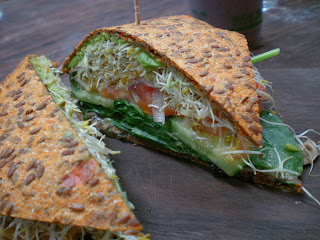 As you can see from the photo, it was jam packed! Between two layers of dehydrated flax bread, was an assortment of goodness - marinated mushrooms, mango salsa, raw cashew 'mayo', tomatoes, lettuce, cucumber, alfalfa sprouts and onion. (I forgot to ask them to leave the onion out, so just picked it out as best I could.)
The sandwich was delicious but be warned - eating was tricky business. a mixture of hands and cutlery had to be employed. 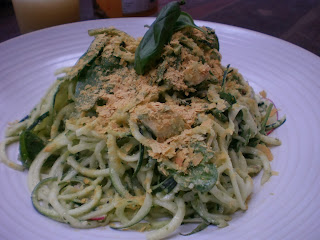 After all of that, we didn't have room for dessert. There was plenty on offer - tarts, cakes, slices, balls, etc. Maybe next time!

libertine101
Perth, Western Australia, Australia
Born into a Greek family, I was a reluctant meat eater throughout childhood. I disliked animal product on the whole, yet was forced to consume them. As an adult, I learned about the horrors of factory farming and about animal sentience. Thankfully, I was able to go my own way and finally become a vegetarian. In the last few years, I flirted with veganism...until I found out the nitty gritty of what actually goes on in the dairy industry. From then on, it has been veganism, all the way for me and eventually, for my partner. With this blog, I hope to offer useful information specific to people living in Perth, Australia - be they vegans, vegetarians, people with egg, gluten or dairy allergies, etc. And although the focus is on Perth, I am sure there is plenty of content here that will be of interest to people living elsewhere.